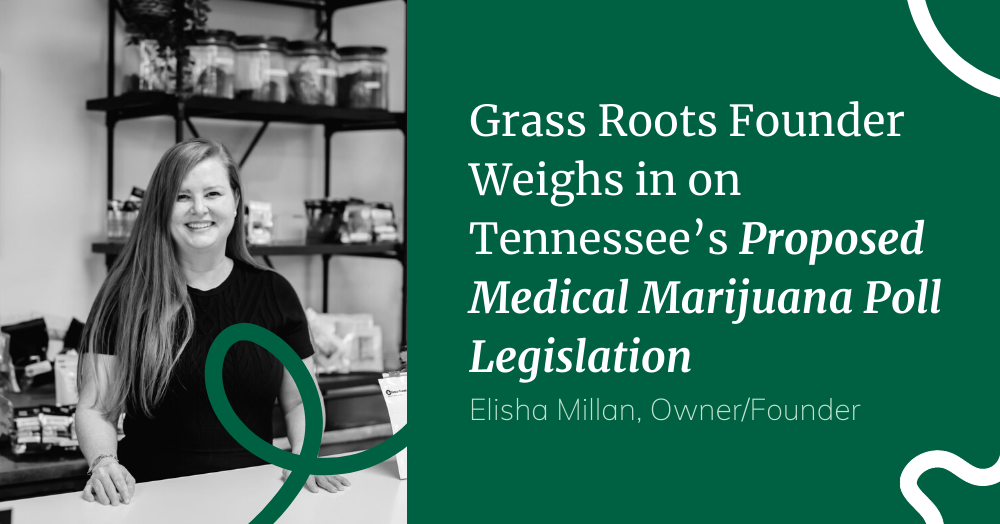 In early July, Tennessee Rep. Bruce Giffey (R-Paris) introduced legislation, H.B. 1634, that would add a poll about marijuana legalization to the 2022 state ballot.

If passed, this bill would require county election commissions to include three non-binding questions related to marijuana legalization on the 2022 ballot, according to Knoxville-based WBIR-TV. Results would be collected and presented to the state legislature.

“In my opinion, this isn’t an issue that really needs clarifying. The support for these products is easily demonstrated by the expansion of hemp and hemp businesses in our area,” Millan says. Since Millan opened the state’s first hemp dispensary in 2017, the industry has grown by leaps and bounds in Tennessee, now with hundreds of dispensaries across the state.

“The further explosion of the delta-8 market shows that consumers deserve access to safe and lab-tested products that they’re able to get from a known source and to have consistency with what they’re purchasing,” Millan says.

Failed Legislation and a Forum for Sharing Experiences

Grass Roots Health leaders have watched the Tennessee legislature debate medical marijuana for years. Most recently, at least 14 bills failed — though as a compromise, S.B. 118 was passed to create a medical cannabis commission to serve as a resource for the study of federal and state laws regarding medical cannabis.

“The continued presence of bills and issues being brought to the Tennessee legislature is proof enough of the public support for medical marijuana,” Millan says. “I would encourage our lawmakers to host an in-depth public forum for voters to share their experiences and how they’ve benefited, and to allow our most vulnerable populations to explain why they need this access.”

Millan says any summer session studies resulting from the medical cannabis commision would be helpful to include data from other states that have seen crime and addiction rates drop after legalization.

However, if surrounding states’ legislatures are an indicator of traction for medical marijuana, advocates in the Southeast face an uphill battle. After Mississippi voters in November 2020 overwhelmingly supported a robust medical marijuana program, the state’s supreme court in May 2021 overturned the initiative and will not hold a rehearing.

“Even when the voters are allowed access to approve or define what they want or need, state legislatures remain a roadblock,” Millan says. “The issue isn’t that people don’t want medical marijuana or that it’s not put on the ballot. The issue is the real-life adjudication of those voter-approved plans. We have gold-standard examples from other states’ successes, like in Colorado, where excellent programs benefit public health and meet the needs and desires of the populace. Southeastern state legislatures aren’t following these examples.”

While like many other advocates, Millan remains discouraged about medical marijuana in the Southeast, she’s eager to connect customers in Tennessee and Georgia with safe, legal, and third-party tested cannabis products in both Grass Roots locations.

“I recommend customers take advantage of what we do have — we may not have everything you’re looking for, but we can find a solution with what’s available now,” Millan says. She encourages anyone curious about hemp products, including delta-8, to call or visit a Grass Roots store.

“We work with customers every step of the way,” Millan says. “Many people are let down when the first product they try doesn’t bring relief. We’re here to help you try different options to help you reach your goals.”

Read to try CBD? Give Grass Roots a call or visit one of our locations, where an educated associate will listen to your concerns, answer questions, and discuss product options. Private consultations are available.
Want to advocate for medical marijuana in Tennessee? Share your story with your elected representatives. Millan recommends sharing real-life experiences or those of a friend or relative related to medical cannabis and how it has contributed to improved quality of life. Find your legislator here.